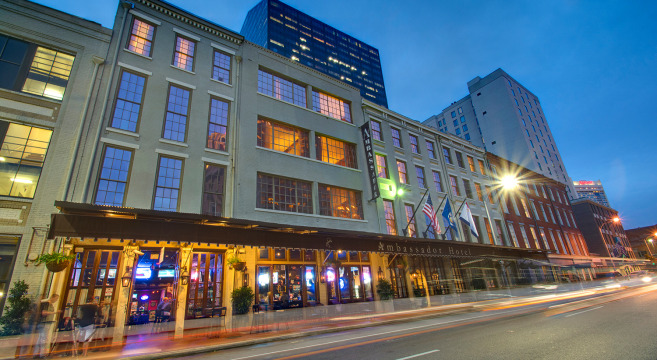 Ambassador Hotel Rebrands As The Old No. 77 Hotel & Chandlery After $14MM Reno The old Ambassador hotel, under new ownership of Provenance Hotels and GB Lodging, will reopen as the The Old No. 77 Hotel & Chandlery in the Spring after a $14 million renovation.

The owners bought the hotel at Tchoupitoulas and Lafayette streets last year from hotelier Warren Reuther.  The property underwent a full renovation, including an expansion to 167 rooms.

“We are honored and excited to be channeling that energy into The Old No. 77 Hotel & Chandlery in an artful, considered way,” said Bashar Wali, President of Provenance Hotels. “From the edgy design to the playful only-in-New Orleans touches, the guest experience will emphasize the innovative spirit of this amazing destination.”

Built in 1854 in the heart of New Orleans’ bustling port district, the building served a coffee warehouse before being purchased by E.J. Hart & Company who operated a chandlery, or general wholesale business, trading in everything sailing ships needed to stock their voyages – from canvas and rope to paper, tobacco and patent medicines. Prior to the turn of the 20th century when New Orleans renumbered its street addresses, the building’s address was 77 Tchoupitoulas Street. In a playful nod to this heritage, a reference to the role hotels serve in provisioning modern travelers and a tribute neighborhood’s artistic roots, the Old No. 77 Hotel & Chandlery takes its name from this original address. Guests will find local art and artisanal New Orleans products available for sale at the hotel.

2 Responses to Ambassador Hotel Rebrands As The Old No. 77 Hotel & Chandlery After $14MM Reno