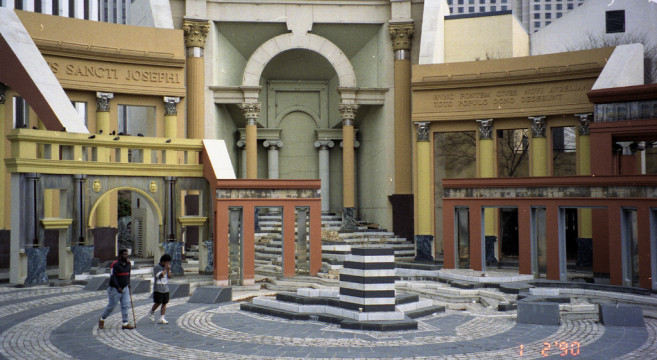 Photo of Piazza d’Italia via Wikipedia

Fresh off the heels of inking the deal to redevelop the World Trade Center site, the City is now seeking proposals to redevelop the  site located at 542 Tchoupitoulas Street and 545 South Peters Street, parking lots known around town as the Piazza d’Italia site.

The announcement was made Tuesday, May 12 by the city.  Mayor Mitch Landrieu said, “The New Orleans market is now very strong now – we signed a lease agreement just last week to redevelop the iconic building at 2 Canal Street as a Four Season Hotel and condominiums. We feel now is the right time to develop the City-owned site adjacent to the Piazza d’Italia. I encourage potential developers to be thoughtful and bold in their proposals that should complement and enhance this City-owned jewel while also reflecting New Orleans’ culture and heritage.”

The RFP asks for proposals to include a plan to develop the site as a first-class commercial and/or mixed-use project complementary to the adjacent land uses (including, without limitation, the Piazza d’Italia), luxury residential, retail, or other professional office use, with entertainment components and other related amenities.

The process is a multi-phase selection process, with the first phase as a request for qualifications and information from developers.  From there, the city will select a handful of developers it deems fit to take on the development, who will then be asked to submit actual development proposals.  This is similar, if not identical, to the process used for the World Trade Center.

The deadline for phase I submissions is Tuesday, June 30, 2015.  What do you think developers will propose?  Another hotel, no?

Leave a Reply to Piazza d’Italia Down to one Developer: A Hard Rock Hotel [We’ve Got Renderings] | Canal Street Beat Cancel reply