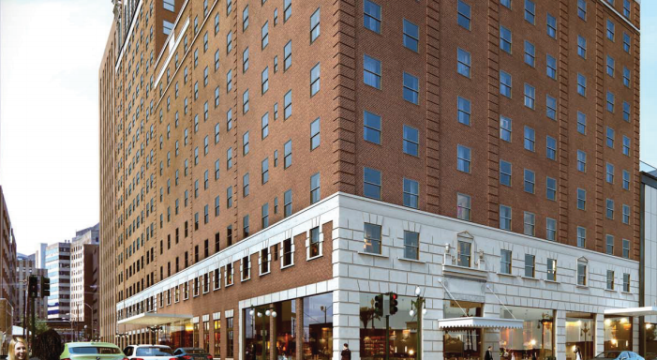 The $76 million renovation of the Jung Hotel on Canal Street is well underway.

The Jung Hotel first opened its doors in 1907, and at one time was the largest convention hotel in the South.

Joe Jaeger and his company, MCC Real Estate, is the developer of the Jung Hotel Redevelopment.

The McDonnel Group, owned by Allan McDonnel, and is the general contractor on the project.

McDonnel released a video of the latest construction progress, which you can view below.

The 550,000 square foot, 17-story building is being rehabilitated and repurposed to include multi-family apartments, hotel rooms, retail, and commercial spaces. In addition, the plans call for restaurants, meeting space, fitness center, and spa.

Both John Williams Architects and Trahan Architects are working on the project. MCC Real Estate is the developer.