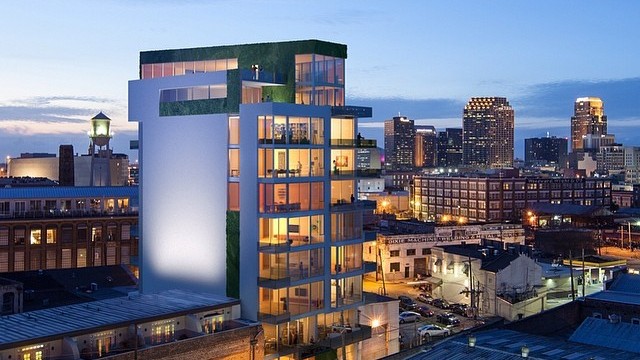 Josh Bruno’s Warehouse District luxury development Granaio Lofts has finally been approved by City Council after over a year. The project received a 6-0 favorable vote in addition to the council members commending the team on the updated design.

“The meeting couldn’t have gone much better,” Bruno told CSB. ‘The council was very receptive to the design modifications, and the well documented meetings with a number of city departments, neighbors, and with the local groups and condo boards.”

Bruno made changes to a number of the floors since initially being shot down City Council in April 2014. The depth of the second floor balcony was reduced, making the overhang on the ground floor smaller as well. On the third through fifth floors, Bruno reduced the depth and increased the width of the balconies, and reduced interior square footage, resulting in an overall 28 percent reduction over three floors. Floors six through eight had their balconies and interior square footage reduced and a balcony added, reducing the overall size of the floors by 26 percent. The only floors with no modifications are the ninth and tenth.

Bruno told Canal Street Beat he is not interested in replicating the old, but rather enhancing the property with modern touches because there is a need for that type of property. “This building is designed to add to the neighborhood and provide a level of luxury, level of high end apartments that is not available in the market today but is in high demand,” he explained.The development, designed by Wayne Troyer of Studio WTA, will feature 20 luxury units, private parking, a doorman, pool, and smart building Crestoron technology to control use of energy, lighting and sound, heating and cooling, flood water management and retention. Granaio’s 360 degree views, and rooftop terrace would have been be accompanied by green living Bio walls to substantially improve the stormwater retention.

“I believe we have one of the best, if not the best, City Council New Orleans has had in many years that will really allow the city to grow in the right direction,” Bruno shared. “They understand that  modern architecture and historical design must be balanced for neighborhoods to evolve. In addition are clearly educated that alternative landscaping like green walls are crucial for urban infill vertical landscaping and water retention.” To date, there are confirmed tenants currently under a non-disclosure agreement. Two of the future tenants are “below the line in the film industry and one is in oil”.Bruno hopes to finish structural, mechanical and electrical plans and break ground in 10 to 12 months. Construction for this type of sliver building is expected to take 16 to 18 months.