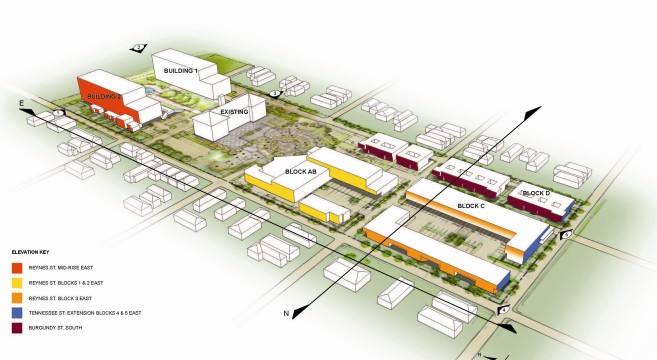 The redevelopment of the former Holy Cross School site that has been mired in neighborhood controversy for months, heads to the City Council next week with no recommendation from the The Historic District Landmarks Commission.

The HDLC failed Thursday (March 20) to reach a consensus on plans to redevelop the site.   The HDLC only governs size and shape (not height) of the proposed development, but nevertheless could not come to an agreement.

The Times-Pics reports that it is the second city agency that’s failed to approve or deny the project; the City Planning Commission failed to reach an agreement at its Feb. 25 meeting.

Perez Architects, the developer of the project, has proposed redeveloping the 13-acre site into a mixed-use project which would include 284 residential units, commercial and office space, 521 off street parking spaces.  Plans also call for the construction of two multifamily towers close to the riverfront up to 75 feet.  The current allowable height limit is 40 feet.

The crux of the conflict between the neighbors and Perez is the height of those two buildings – the neighbors say its our of character and doesn’t fit in with the historic nature of the neighborhood.  The developers say its necessary for the survival and profitability of the overall project.

The City Council takes up the matter on March 27…we shall wait and see.

What do you think the city council should do?

Leave a Reply to How Should The Council Vote On Holy Cross? | Canal Street Beat Cancel reply